Ms. Reuther was selected to the concert choir of the Suburban Council Music Festival in 2016 and 2018 and the Area All State Music Festival in 2016. She has participated in many charity events and sang for “Raise Your Voice: Sing for Kids” to benefit Court Appointed Special Advocates (CASA), the Center for Disabilities Telethon and the Hope Seven Food Pantry Benefit in Troy. As a performer she appeared with the Saratoga Children’s Theatre as a beggar woman in Sweeney Todd.  Ms. Reuther will pursue studies to become a music educator “to bring music into children’s lives.”

Mr. Contois is a member of the Tri-M Music Honor Society. He was chosen for the 2017 All-National Honor Ensembles as well as All-Eastern and participated in the NYSSMA Area and All State Music Festivals. In February 2018 he was WMHT Student of the Month, and he performed in a Schenectady Light Opera Company (SLOC) youth production as Tony in West Side Story. Mr. Contois plans are to pursue a career in musical theater.

Jurors for the awards were Robert Reeves, Megan Wilson and Yiping Wu. Mr. Reeves was BHOS’s music director for two decades and started the scholarship competition in 1997. Mrs. Wilson is a member of the music faculty of Emma Willard School and Russell Sage College and maintains a private voice studio. Mr. Wu is a professor at Schenectady County Community College where he directs the SCCC choruses and teaches aural skills and voice.

Funded as a component of the organizations operating budget, the Vocal Scholarship Program is fundamental to BHOS’s community outreach endeavors. BHOS is working to extend the reach of this competition within the Capital Region. For information: www.bhos.us. 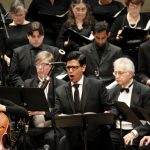 “Elijah” performance makes The Daily Gazette Best of 2017Concerts, In the News 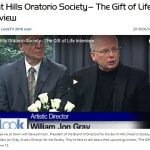 Look TV Interview with Bill and DaveConcerts, In the News